In Shrimad Valmiki Ramayana, we see Lord Ram personally went to see many Yogi-Bhaktas like Rishi Sharbhanga, Rishi Sutikshana, etc who were keeping their bodies and waiting for the arrival of Shri Ram in order to see Ram’s personal incarnation, otherwise, they were already fit to go to the supreme abode, the abode of supreme Brahman. Those great yogis had already won all the worlds from their great asceticism and penances, they were waiting so that they could see Bhagavan Shri Rama and cast off their material bodies in his presence so that they could achieve his personal abode Saket-Loka. Through the grace of Bhagavan Shri Ram, they got eternally young bodies as like devas who bear the young appearance of the twenty-five-year-old person. Thus, the tradition of Yogi-Bhaktas in Vaishnavism has been always in existence, at least it is as old as Ramayana.

Śrī Yōgīrāja Dēvarahā Bābā was an ageless Ramanandi Yogi-Bhakta Vaishnava in Jagadguru Ramanandacharya Parampara.. and In Gita too, Lord himself asserts that among all devotees, he loves Yogi-Bhakta most!

His age was a great mystery, as per his close devotees he was more than 500 years old and some believed he was a friend of Goswami Tulsidas. 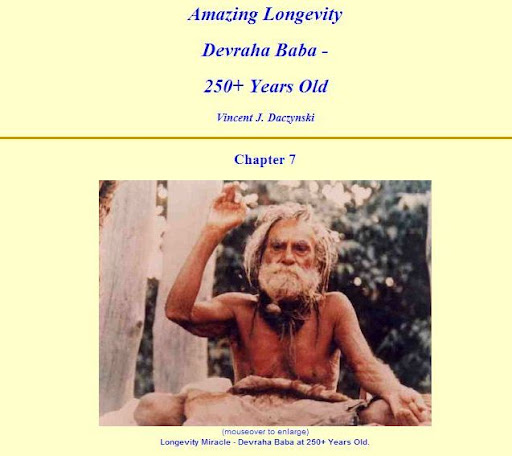 About Amazing longevity of Devaraha Baba, Vincent J. Daczynski writes on his website ( http://www.amazingabilities.com/amaze7a.html ):- ” An Indian saint named Devraha Baba, who passed away in 1990, was a yogi who lived just such a lifestyle. Devraha Baba was from the spiritual heritage of the Avatar Ramanandacharya [Jagadguru Ramanandacharya] and lived beside the Yamuna river in Mathura. He lived on a 12-foot-high wooden platform where he usually remained stark naked. He never ate food. He only drank water from the Yamuna river. He claimed he could be in two places simultaneously (a siddhi described in Patanjali’s Yoga Sutras). He was observed to have stayed underwater unaided for half an hour. He always radiated love. He was a Premaswarupa, an incarnation of love. He gave darshan (spiritual blessing) to devotees who came to pay homage. Many came to visit this great illustrious saint. People came from all over India and from all walks of life. He was a favourite among India’s senior politicians and was visited by Mrs Indira and Mr Rajiv Gandhi. Ministers, saints, yogis, priests, rich and poor all came for Baba’s darshan.”

Vincent J. Daczynski writes further – ” It was rumoured that Devraha Baba claimed that he had lived for over 700 years. Until I can substantiate this rumour I need to consider it just a rumour. Nevertheless, I make mention of this rumour because Devraha Baba’s family tree records place his age to be at least 250 years when he took mahasamadhi (relinquished his body) in 1990. If he was able to live to be 250, then it is possible that he lived for 700 years as well. Baba was called, “The Ageless Yogi.” Devraha Baba gained mastery over the khecheri state of yoga whereby he was able to control his hunger and the time of his death. Dr Rajendra Prashad, who was the first president of India, verified Devraha Baba’s old age. He said that he personally attests to Devraha Baba being at least 150 years old. He said that when he was 73 years old, his father took him to see Baba, who was a very old man, and that his father already had known Baba for many years before that. An Allahabad High Court Barrister had stated that seven generations of his family had sat at the feet of Devraha Baba.

Incidentally, Devraha Baba had predicted the time of his death five years in advance.”

Though whatever was his reality, no one can deny that he was a god realised soul, a great devotee of Lord Ram. Shri Ram was his life and Ram Naam was his breath. He had command over Vedas, Upanishads, Yog-sutras, Ramayana, Ramcharitmanas and almost all Vedic-scriptures. He was used to quoting frequently from Ramcharitmanas, and Gita in order to explain divine teachings in simple words to devotees. He never went outside his Ashram (hermitage) for making disciples, but it was common people who were attracted by his divine aura and used to go near to him to seek his blessings, to request to make themselves his disciples. Devaraha baba never asked his devotees to write any book on him, rather he said devotees should read Ramcharitmanas to know the supreme truth. Baba used to shower his love on all devotees, be they were Hindus, Muslims, Christians, Sikhs or Parsis, belonging to different religions.

Baba was a great accomplished Yogi, he had won over nature, he never used to eat anything, or wear any cloth even in the extreme freezing cold! Though He was exclusively devoted to Lord Ram he loved Lord Krishna as well. He used to bestow Ram Mantra mostly but some times he used to bestow Krishna-Mantra and Narayana Mantra as like a true Ramanandi Vaishnava. As per Atharva-Veda, after attaining divinity like Devas a Yogi lives between earth and sky. So Devraha Baba used to live on a 12-foot-high (3.7 m) wooden platform near the famous Sarayu river and wore a small deerskin. A barricade of wooden planks hid his semi-naked body from his devotees, and he used to come down only to bathe in the river. Sitting on the wooden-platform, He used to bless devotees by touching their Sahastrar Chakra. He used to touch Sahastrar Chakra during Deeksha of Mantra (initiation), too. In the same manner, he used to bless common people or even well-known people from societies who used to seek his blessings. Since Baba was Brahmarshi or Brahmleen Yogi, so there is no difference in touching Sahastrar Chakra either with hand or feet, if it is touched by a Brahmleen-Yogi. In same manner Baba had blessed first President of India Dr Rajendra Prasad, and other famous dignitaries like ex-Prime-ministers of India – Indra Gandhi, Vishwanath Pratap Singh, Rajiv-Gandhi, Atal-Bihari-Vajpayee etc by his feet. During British-India times, when India was not independent, many British officers were used to seek blessings of Devraha baba.

About Devraha Baba, Dr Ram Naresh Tripathi writes: “In our century, Yogi Raj Devraha Baba emerges as a timeless figure, whose antecedents get lost in the remote past. Popular tradition holds him to be ageless. There is historical evidence of the British monarch, King George V, having had his darshan at Allahabad in 1910. A host of presidents, prime ministers, rulers, lesser politicos and savants sought his sage counsel and benediction. It is all too well documented by newspaper reports to need recounting. His vast following encompassed people of diverse backgrounds and beliefs. When he relinquished the body, termed an act of samadhi, on June 19, 1990, his disciples were disconsolate. They were so accustomed to his comforting presence that they suddenly found themselves adrift. He lived in their hearts, no doubt, but they still needed to see him and talk to him. They should have remembered the master’s quiet assurance that the Siddha yogi never dies. “He is Eternity: he is forevermore… he does not die when the body dies”.

Since Devraha Baba was a great Yogi-bhakta of Lord Shri Rama, therefore on requests of saints and VHP he took the responsibility of leading the Shri Ram-Janmbhoomi movement to build the grand magnificent temple of Lord Shri Rama on his birthplace. There was a disputed structure built by a foreign invader Babur after demolishing a grand Shri Rama-temple once stood there on very site of Ram’s birthplace. Then Baba used to live on the bank of river Sarayu in Deoria, Uttar-Pradesh. However to lead the movement, Baba didn’t hesitate to shift his location from Sarayu, Deoria to the Yamuna, Vrindavana which was very near to National Capital of India, Delhi, so that he could talk and guide then prime minister Rajiv Gandhi and other officers in Government of India on regular basis for a peaceful solution of Shri Rama-Janmbhoomi movement. Baba, through his divine power, perceived well in advance that many devotees (Karsewaks) will be harmed by the state machinery, and this happened in 1991 when devotees held a protest in Ayodhya and demanded the removal of disputed structure to build the grand temple for their beloved Shri Rama. The pain to see such thing would happen soon was unbearable for Yogiraj Devaraha Baba, therefore he took Maha-Samadhi on Yogini-Ekadashi 1990, well before that unfortunate incident.

Some teachings of Devaraha Baba:-

✿ The abstract of all Veda-s is the ‘Rama’ Naam, therefore sing and chant it. It is the most nectarine thing to do always.

✿ To achieve the supreme god, there are five means told in scriptures, those are (a) Vairagya (Non-attachment, Dispassion) towards the world, (b) J~nana (right-Knowledge), (c) Yoga (concentration of mind in Bhagavan), (d) Prem (loving-devotion), and (e) Tapa (penance).

After all worldly cravings left the soul; one becomes solely absorbed in thoughts of Shri Rama’s feet.

When all worldly attachments cease, only one thing remains to achieve by a soul, the lotus feet of Bhagavan Shri Rama.

In the age of Kali neither Yoga (concentration of mind), nor the performance of sacrifices nor spiritual wisdom is of any avail; ones only hope lies in hymning Shri Rama’s praises. Giving up all other hopes, whosoever worships Shri Rama and fondly chants His praises undoubtedly crosses the ocean of transmigration. The power of the Name is thus manifest in the age of Kali. The Kali age possesses another sacred virtue: in this age projected acts of virtue are rewarded, but projected sins are not punished.

✿ Who is Bhagavan?

From whom all these six – all aishvarya, Dharma , Yasha (fame), Shri (all kinds of potency), Vairagya (non-attachment), Moksha (liberation) – automatically originate is Bhagavan.

✿ Supreme Welfare of all souls lies in singing ‘Rama’ Naam, there is no doubt in it. So, chant with all heart. One should chant ‘Rama’ Naam in one’s all breathes.

One who chants ‘Rama’ Naam, upon just remembrance of Rama for a moment, one has taken bath in all the sacred pilgrimages, has donated whole earth like King Bali, has performed all kinds of sacrificial Yaj~na, and has worshiped all deities.

Meaning: In a pair of wooden firesticks, Assume your heart as one and Shri ‘Ram’ Naama as another one. The Brahman (Rama) will reveal himself from heart if one hits (chants) ‘Ram’ Naam always ‘on his heart’ (with heart) as like the fire reveals itself upon continuous rubbing of firesticks against each other.

[If one wooden stick ( राम नाम) would be hit or rubbed against another wooden stick (ह्रदय) there will be the divine revelation of Brahman, The Absolute. So chant ‘Ram’ Naam always. This is the abstract of all Vedas, Upanishadas, Puranas, Tantras etc.]

Shastra proof:
In Shvetashvatara Upanishad, It is told:

Fire is not seen until one firestick rubs across another, though the fire is still there, hidden. So does Brahman remain hidden until being revealed by the mantram Aum (which is first sound and denote to Nirguna-Brahman). Let your body be the lower firestick and the mantram Om be the upper. Rub them against each other in meditation and realize Brahman.